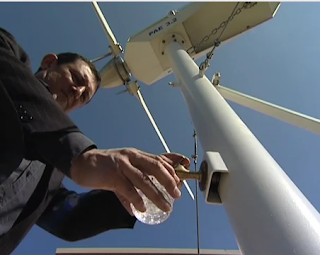 With recent flooding around the globe, it may seem like water is overly abundant. However, nearly 20 percent of the world’s population lives in areas without access to fresh drinking water. French inventor Marc Parent has developed a creative solution to the problem.

Inspired by the mechanics of a dripping air conditioner, Parent and his company Eole Water manufacture wind turbines that pull fresh water out of thin air as they turn. The WMS1000 wind turbine is a typical three upwind composite blade turbine that generates electricity as the wind moves. The air is sucked into the turbine’s nose and sent through a cooling compressor, which extracts moisture from the air. Water droplets then drip down a stainless steel pipe inside the shaft and collect at the base that houses a filtration and purification system.

Each unit can create 16.3 gallons of drinking water an hour using only moisture and powered only by wind. This is the first turbine that creates water instead of extracting it from other available sources such as wells, lakes and streams. Not only does it create, but it collects, treats and distributes water. The model turbine is currently being tested in France and Abu Dhabi, projected to fully launch the end of 2012.